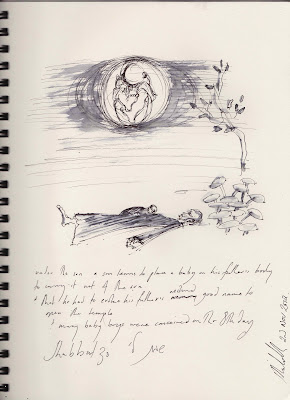 under the sun, a son places a baby on his father's body to carry it out of the sun
and opened the temple by evoking his father's restored good name (forgiveness after the sin that resulted in a dead baby, who would have been his brother)

and 8 days later, many baby boys were conceived.

(law that one is allowed to extingush a lamp on shabbat to care for a critically ill person, leads to R. Tahum telling stories about Shlomo and David's death, for english translation of this talmud page, see here)
Posted by Jacqueline Nicholls at 19:47