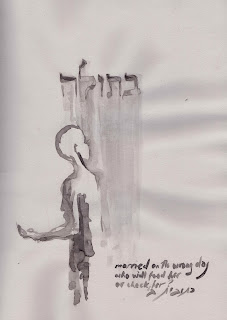 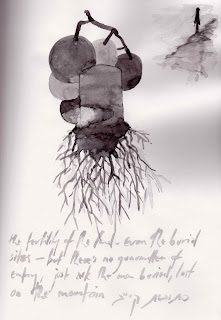 goodbye mesechet ketubot.... this section begins with asking who has responsibility for the betrothed bride whose wedding has been delayed. Who will give her food and drink? It ends with stories of the miraculous produce of the land of Israel. Gargantuan fruits and grains, enough to sustain a nation of abandoned brides.

I was always led to believe that the ketubah, the marriage document, was instituted by the rabbis to protect the vulnerable women, so that they would have property should the marriage end in divorce, or her husband dies first. But steadily, bit by bit, the property isn't really hers. She has to contest it with the orphans, some of whom might be her own children. At one point in the discussion they note that the ketubah was paid in money, but those funds were too readily available to those who might be quick to anger and divorce. So the ketubah was kept in land, which is not so easily sold. And if she would want to sell it, she is paid in installments by the court.... many times over these months I have wanted to argue back - It's HER money!!! not the courts, or the heirs. but hers. These were the legal conditions she entered the marriage, and yet what should be hers is legally withheld from her.

Another bit of rabbinic cognitive dissidence, is when it is remarked that perhaps treating a wife badly would make her want to leave, and so one shouldn't do it. (e.g. distrusting her and making her swear an oath that she won't steal if he makes her a steward in his business) - the rabbis tell themselves that one wouldn't choose to live with a snake in a basket. Meaning, that no one really wants to stay in an abusive situation. I don't expect Talmudic rabbis to have the sensitivity of today with respect to domestic abuse situations, and why people 'choose' to stay with abusive spouses. But I do expect them to listen to their own words. Because also repeated throughout this tractate is an argument that a woman prefers to be married than single, even to an idiot, or a poor man who cannot provide food. (It is amazing how much of this is about food...) Because he gives her status in society.  In this society, the rules are such that single, divorced, or widowed women are vulnerable, find it hard to access their money and support themselves. They exist on the margins and the objects of pity and charity. These are rules of society that the rabbis discuss, refine and legislate.

Yet again I have faced the question: why am I learning this stuff.... and have found it hard to write up my thoughts and drawings every day. (Hence the huge chunk that I have posted today) But I keep coming back to the same answer. These difficult texts are not easy to walk away from. They form the basis for Jewish life and law, containing stories and discussions that are an ongoing conversation in beitei midrashim, academic halls and synagogues, online, and even art studios. Between the religious, the critical, the searching and the curious. I could read these texts with a sense of contextualisation - isn't it fascinating how society worked back then. But mainly I read these text with a sense of outrage that women weren't part of the discussions. How much could have been different if only women had the right of reply when certain assumptions were being made, or at least been better informed as to how the law worked, what questions to ask and how to manage one's resources... My stopping this learning won't silence the texts and make them a lesser part of the tradition. All it would do is silence my voice and prevent me being part of the conversation.

And so I picked up the ink-stick, ground it against the stone, dissolving it in water, and made the grey washes, and formed my reply. It's just not a voice I really wanted broadcast every day. Sorry.
Posted by Jacqueline Nicholls at 18:17