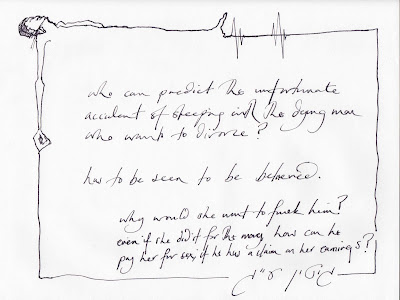 who can predict the unfortunate accident of sleeping with the dying man who wants to divorce you?

has to be seen to be believed.

but why would she want to fuck him?
even if she did it for the money,
how can he pay her for sex if he has a claim on her earnings?

what if a husband says to his wife: this is your divorce from today if I die... what is her status? and if he was dying, and makes it conditional that he does not recover from this illness, and then an unforeseen accident happens, is she divorced? and the time between issuing this divorce to when he dies, is she like a married woman or a divorcee? She cannot be alone with him, and needs 2 witnesses, lest they sleep together. and if they do, is the sex an act of betrothal and they would need a second divorce document? Or perhaps it wasn't sex as betrothal but he paid her just for sex, as an act of prostitution. But at the end of this page it describes her status as being like a married woman, in that he has ownership of any lost items she finds, any produce of her field belongs to him, and anything she earns. Which would include the money she earns prostituting herself to her soon-to-be-ex-husband...  but why would a woman, who has just heard from her dying husband that he wants to treat her as a divorced woman after his death, try to sleep with him? to cancel her status as a divorcee so that she will be widow.... learning this page I couldn't stop thinking, if he wants to divorce you, why try to sleep with him... why?
Posted by Jacqueline Nicholls at 23:46