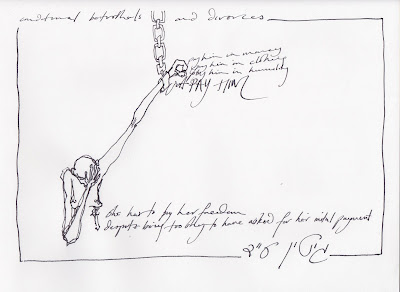 she has to pay for her freedom
despite being too shy to have asked for her initial payment.

this page discusses the case of a husband giving his wife a divorce on certain conditions. e.g. she has to pay him a certain amount of money. or return of a garment that is lost... she has to pay. It is debated between R. Huna and R. Yehudah if the divorce is immediate or only on the fulfillment of the condition. This is compared to conditional betrothals, where it is conditional on him paying her money. In that case it is noted that the betrothal is only valid once the money is paid, as she might be too shy to ask for her money. But with this type of conditional divorce, she has to pay the money, no consideration as to how she might feel about this arrangement imposed upon her.
Posted by Jacqueline Nicholls at 22:23