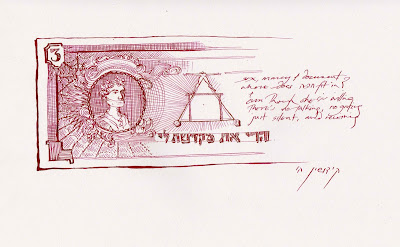 sex, money & document
but where does chupah fit in?

she has to be willing.
there's no talking, no giving.
just silent, and receiving.

the talmud discusses the three methods of kiddushin - sex, money and written document. R. Huna suggests chupah as an additional method of kiddushin. and then spends much time discussing how chupah is similar or different to the other three, one interesting comment is that in marriage both parties have to be willing. The talmud then discusses how the acquisition happens with money. He gives her money, or something of value, and declares that she is now his. the second part notes that if she gives him, or makes a declaration, then this is invalid. She has to turn up and be willingly under chupah. The object of sales is rarely a speaking role.

On the bright side, I'm really enjoying playing with banknote imagery and patterns.
Posted by Jacqueline Nicholls at 23:21