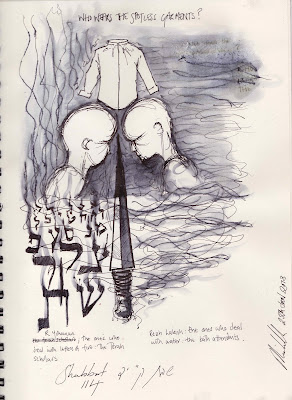 who wears the spotless clothing?

fire and water divide them again.

(following R Yochanan statement that clothing = honour, there is a discussion about torah scholars should be well dressed, without stains or patches. R. Yohanan interprets the word 'builders' to be Torah scholars - Torah is said to be written in black fire on white fire, and the hebrew lettering is called 'the flame alphabet.' Reish Lakish interprets the word 'builders' to be the bath attendants, as they are meticulous in their clothing. This pair, who met while R. Yohanan was bathing, and R. Yohanan turned Reish Lakish into a torah scholar, fatally argued over a knife, was it completed in fire or water. for english translation of this talmud page, see here)
Posted by Jacqueline Nicholls at 12:35