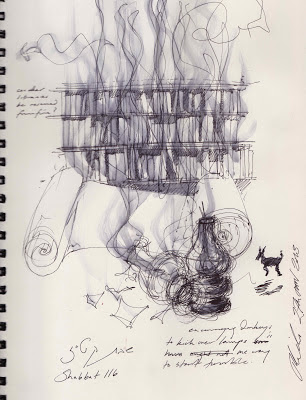 can other libraries be rescued from a fire?

and encouraging donkeys to kick over lamps is one way to start trouble.

(while discussing rescuing sacred scrolls from a fire, and not the scrolls written by heretics, the talmud mentions the books of Abidon, a library where ideas and knowledge was debated. can scrolls be rescued from there in case of fire on shabbat? later on the page is a story of Imma Shalom setting up a Christian official who claimed didn't accept bribes. she gave him a lamp, and then asked him to rule if daughters could inherit. He ruled yes, the old rule of property only going to sons was now obsolute. Her brother, R. Gamliel, brought a donkey that kicked the lamp, and thus revealing his bias. it is an odd story. using a woman to prove that inheritance should only go to the males..... the law is an ass...
for english translation of this talmud page, see here)
Posted by Jacqueline Nicholls at 12:04