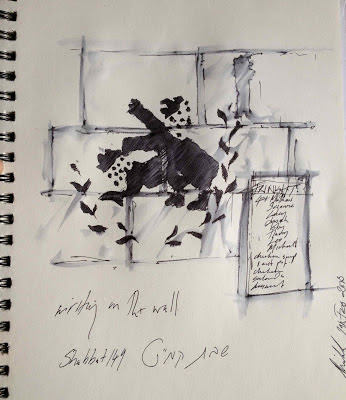 writing on the wall isn't a business document.
but that doesn't mean it doesn't have something serious to say.

(the prohibition of using written lists as reminders for guest and food, as may come to erase details. debated if this applies to writing on the wall. the discussion about meals leads to prohibition of using lots to divide portions when eating with non-family members. which leads to a story of Nebuchanezzer, who would use lots to determine which exiled royal leader he would sodomise next. the drawing is from a photo of some graffiti that appeared in Jerusalem around the time of Pride 2008. for english translation of this page, see here)

shabbat shalom from NYC
x
Posted by Jacqueline Nicholls at 14:08