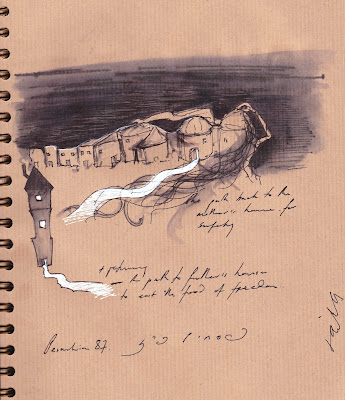 the journey back to the mother's house, in a time of a need of safety

and returning to the father's house, to eat the food of freedom from slavery.

the pedagogy of women's bodies

(this page begins by discussing a bride who returns to her father's house to join him in the pesach offering and not her husband. It then interprets various verses about a bride who is welcome at her in-law's house. This leads to exploring verses about breasts comparing them to towers, and places of learning. Another example of using a woman's body as a teaching tool is an expansion of the story of the prohet Hosea who is instructed to marry a prostitute, have children with her then cast her out. when he refuses, God says: you see! That's how I feel about the people.... The page concludes with describing the people in exile in Bavel, as going back to their mother's house. they have returned to Abraham's birthplace)
Posted by Jacqueline Nicholls at 01:31