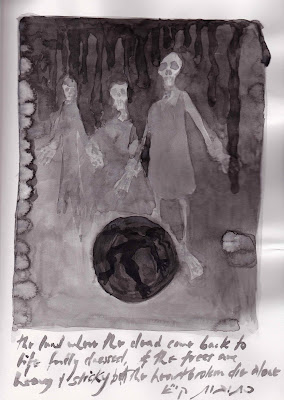 the land where the dead come back to life fully dressed, and the trees are heavy and sticky.

but the heartbroken ones die alone.

this page discusses the unique value of the land of Israel. the righteous who are buried there will come back to life, but fully dressed (no naked zombies...). those who are buried outside of the land will also be resurrected, but would have to roll to the land through underground tunnels. In the Venice Jewish cemetery there were some ancient gravestones, moved from the old cemetery that had circles cut out from the part that was below ground. So the dead wouldn't have any obstruction when they start rolling. Also on this page, Rabba's brothers write to him in Bavel trying to persuade him to move to Israel. They tell him of a man who loved a woman overseas, but he didn't have permission to move, so he died alone.
Posted by Jacqueline Nicholls at 17:09