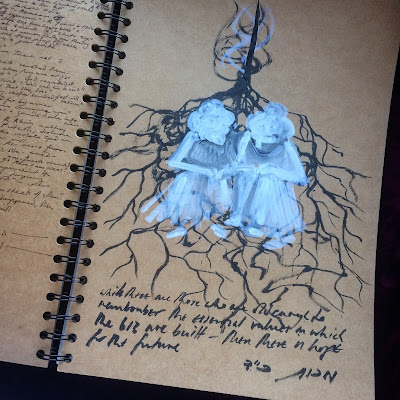 while there are those around who are old enough to remember the essential values on which the 613 are built, then there is hope for the future after the destruction.

Makkot closes with a discussion about how the 613 mitzvot of torah can be built from essential principles - either 11, 6, 3, 2, or 1. It also has the conversation between R. Akiva and some other Rabbis who are witnessing the rise of Rome and the destruction of the Temple in Jerusalem. The Rabbis weep while R. Akiva laughs. He explains his laughter, as if the destruction which was prophesied happened, then so too will the renewal and rebuilding. There will be old people sitting in the streets of Jerusalem. The verse quoted cites both old men and old women, they will be the ones who hold the memory of how to reconstruct the torah. Perhaps it is a sign of my getting older, that I love that it is the presence of the old people who are symbol of hope. Too much importance is placed on the potential of youth and the future. And while they are important, the value of older generations are too often ignored and disrespected. So I have drawn two elder women, sorting it all out.
Posted by Jacqueline Nicholls at 10:29