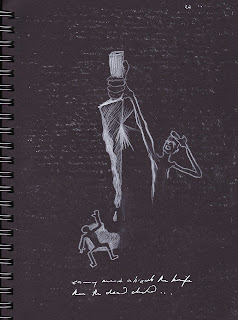 caring more about the knife not becoming impure than about the dead child.

(horrific story to show how corrupt the morality of the temple was. during the competition of which priest got which job, one priest stabbed another. during the commotion of what to do, who to bring the sacrifice to atone for this, the dying priest's father realises his son is not yet a corpse and is concerned to ensure the knife is removed so not to become impure through contact with a corpse. it is a sharp shocking story, written in the Talmud about those corrupt priests who had their priorities all wrong... )
Posted by Jacqueline Nicholls at 03:19