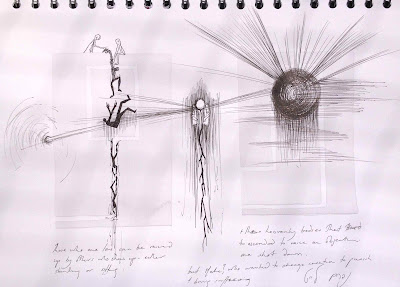 those who are low can be raised up by others who show up, whether they stand or sit.

and those who are on high, who try to raise an objection, can be shot down.

and Moshe? who wanted to change creation to punish and bring suffering.

The page discusses the mitzvah of visiting the sick. That even if there is vow that hinders human relationships, not to benefit from another, that should not prevent someone doing this mitzvah as a visitor takes away one-sixtieth of the ill person's suffering. The Torah source for visiting the sick is from the story of Korach's followers, who were fated to be cast alive into the earth. The talmud describes Moshe as asking for Gehenna to be created, or be brought closer, for these people. Another story on this incident is that the sun and moon rose in the different levels of heaven to threaten God that they would not longer shine if Moshe's honour is not upheld and Korach and his followers aren't punished. God, upset that the sun and moon are silent when it comes to being objects of idolatry and don't protect God's honour. So shoots them down, hence the rays of light before the sun rises... but what of Moshe in this story? He calls for vengence and suffering.....

(apologies for the picture quality, these recent draw yomi's come from Krakow, and are photographed and not scanned. I'm at the 25th Jewish Cultural Festival. Where I'm presenting my art at the JCC Krakow at 5pm. and later (11pm ish) will be doing The Rebbetzins' Disco shennanigans. So if you are around, do stop by and say hello. it will be lovely to see you.)
Posted by Jacqueline Nicholls at 10:27