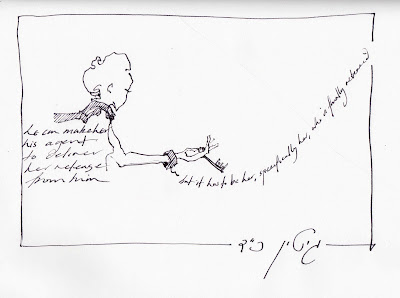 he can make her his agent to deliver her release from him.

but it has to be her, specifically her, who is finally released.

earlier it is mentioned that a woman can deliver her own divorce document to the court and declare that it was written and signed. This page questions the need for this as she is is divorced on receiving this document. The discussion deduces that this is in the case where the husband has given the divorce on condition that she is his agent, to a particular court, to be given in a particular way. including her needing to appoint an agent to receive for her. something that is controversial as it may be degrading to the husband if she does this. it seems so controlling that even in the process of her being released from him, he has to make her fulfill his conditions, despite how it may affect or degrade her. Also on this page is the opening mishna to the next chapter which emphasises that the divorce document has to be written specifically for her, not another wife of the same name, etc. but her. only her.
Posted by Jacqueline Nicholls at 23:11