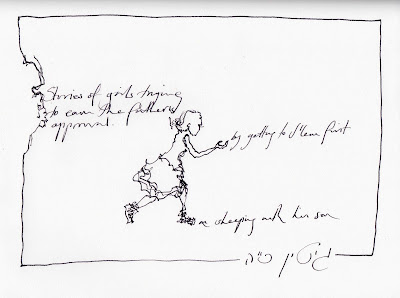 stories of girls & the father's approval.

getting to Jerusalem first,
or sleeping with his son.

this page discusses why a husband cannot retroactively designate an ambiguous divorce document and decide which of his wives to discuss. The mishna rejects this as the document has to be written for a specific wife, but then it discusses the case of a man saying he will divorce the wife who comes out of the door first. making it dependent on another person's actions. The rest of the page discusses this type of retroactive clarification, and compares it to a case where a father says that the Pesach offering is for whichever of his children get to jerusalem first (to motivate them), only for his daughters to have more enthusiasm than his lazy sons (because if girls beat boys, there must be something wrong with the boys...) The other case of retroactive designation cited is if a man says to a woman that sleeping together would be an act of betrothal, only if his father approves.
Posted by Jacqueline Nicholls at 00:43