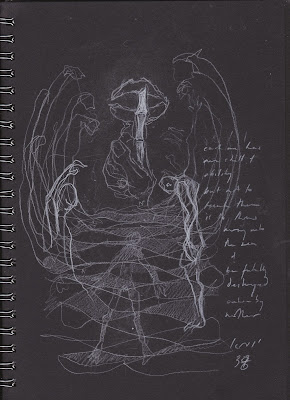 each one has their own skill and ability.
but not to teach is the throw it away into the sea and be fatally consumed by one's mother

(various craft skills used for the temple are discussed. secrets that are not passed on to the collective. some of these skills are to prevent them falling into misuse, but others like the ability to have different nibs between different fingers and write all four letters of God's name at the same time - that was not passed on for wicked reasons. wickedness leads to maternal canabalism and destruction by water)

Posted by Jacqueline Nicholls at 20:16