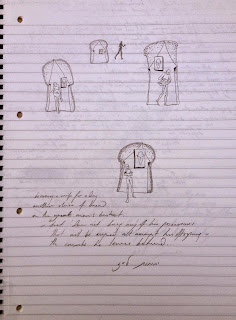 becoming a wife for a day, another slice of bread, in the great man's basket.
- but does not bring any of his possessions that will be argued out amongst his offspring, the crumbs he leaves behind.

(the practice of having a wife-for-a-day for some well-known Rabbis won't result in children inadvertently marrying their siblings, unlike ordinary men, as their name will be known to their children. this practice is referred to as having bread in one's basket is satisfying, even if they don't actually sleep together, just knowing that there is a legitimate sexual partner is enough to curb the rabbinic lust... the page finishes off though saying that one shouldn't marry a woman with an inner intention of divorcing her. how that fits with wife-for-a-day is not discussed...)
Posted by Jacqueline Nicholls at 10:31