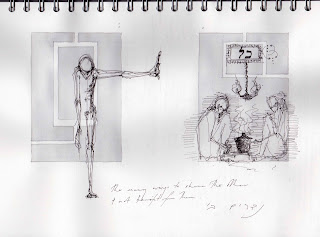 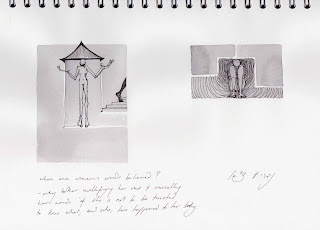 This has been a very odd section of Talmud and Jewish law. Basically it is the details of how to restrict oneself from what would otherwise be permitted. Many of the cases involve the breakdown of relationships where one person is blocking out another. I've been calling it 'The Little Book of Broigus.' Some of the examples seem absurd and cruel. And yet instead of finding a way for the relationships to be repaired, these are the structures that enable shunning and separation. One particular example discussed is a son vowing that his father can't benefit from him. And then he is getting married and wants his dad there. The talmud discusses how the father can be at the wedding, while upholding the original vow. Or two people who have vowed that they can't benefit from each other, and then they go on a journey together. But only one brought food.... and so begin the daft games about 'leaving it on a stone for the other to pick up casually'... It's fairly funny and absurd that begs lots of questions: what happened to make them shun each other in the first place? Why are they going on a journey together? And what is it doing as part of Jewish law? And if the rabbis don't like people making vows (they repeatedly say it is akin to idolatry, and are reluctant to publicly teach the details of the laws of vows), why are there so many rabbis making quite extreme vows? And why is it in this part of the Talmud - Seder Nashim?

and then it stops being quite so funny.

The mechanics of vows and cancelling vows are discussed in this bit of the talmud because men can nullify their women's words. The wives and daughters are under the Master Of The House. And while they are under his jurisdiction, their vows are for him to uphold or cancel as he sees fit. They have little autonomy in relationships, what happens to their bodies, and to control what they do and make. A repeated statement throughout this mesechet is that women don't take vows seriously because they know that there is always a man around to cancel their words. So why take women's words seriously when the women themselves don't?

This mesechet ends with various cases where the women think they have slept with their husbands, but their husbands deny it. So it turns out that they've had non-consensual sex with a stranger. And in each case the ruling is that they aren't believed, and suspected of "casting eyes on another man" and making up the rape story so that their husbands will divorce them (they are married to priests, who cannot stay married to their wives if their wives have been "defiled"). The last case is of a male adulterer, while hiding from the husband, sees that a snake has eaten some food that the husband is about to eat. He comes out of hiding to warn the husband, but the husband now has a dilemma. Has this man, who has saved his life, just slept with his wife, or not? The talmud gives the adulterer the benefit of the doubt. If he had slept with the wife, then why save the husband's life..... The man in hiding is not treated with suspicion, like the raped wives, but his words are believed.

Vows and oaths are part of a system that take words seriously. When the spoken word has the power to create what is forbidden and permitted, define reality and give the speaker control on who and when they interact with others. Of course women don't have the last word to do just that. Goodbye mesechet nedarim. I thought you were a welcome break from the misogyny in Seder Nashim. I spoke too soon.

I chose to use the shape of the talmud pages to set the composition of these drawings. the text blocks rendered in a neutral watercolour wash (paynes grey, one of my favourite grey colours) And the drawings in fine black ink pen. In order to fit both sides of the daf on the page, I had to re-orientate the drawings to be in landscape not portrait as per the other talmud drawings. This also resulted often in a drawing in two halves. Echoing the gesture of "I am separating myself from THAT" which is inherent within the discussions on vows.

Posted by Jacqueline Nicholls at 23:15