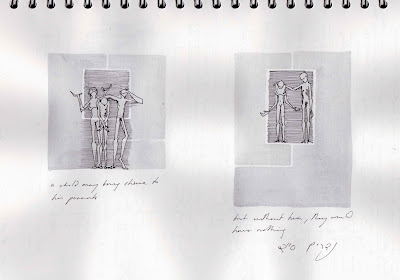 a child may bring shame to their parents.

but without the child. they have nothing.

allowing to cancel a vow if it brings shame to the parents' honour. later in the page it discusses Moshe being able to return to Egypt after swearing he wouldn't return because those who saw him kill the Egyptian are now dead. However this discussion identifies them as Datan and Avirum and they are alive. The Talmud justifies describing them as dead as they have lost their status. It continues to call other living people as dead - the poor, the lepers, the blind and the childless.
Posted by Jacqueline Nicholls at 11:40