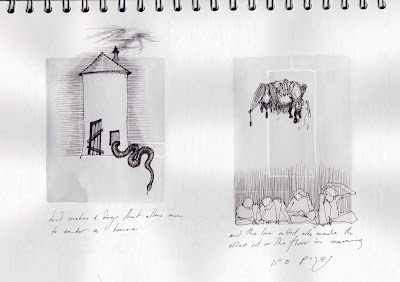 dead snakes and dogs who allow one to enter a house.

and the live rabbit who made the elders sit on the floor in mourning.

Vowing not to enter a house because of a snake or dog inside. Later in the page there is a story of King Zedikah who saw Nebuchanezzer eat a live rabbit. Zedikiah had to swear an oath not to tell anyone. When Nebuchanezzer's oppression got tougher, he told the members of the Sanhedrin. Nebuchanezzer was furious as vows can only be cancelled in the presence of the one who initiated it. The Sanhedrin admitted their error and began mourning that became the destruction of the Temple.
Posted by Jacqueline Nicholls at 11:47