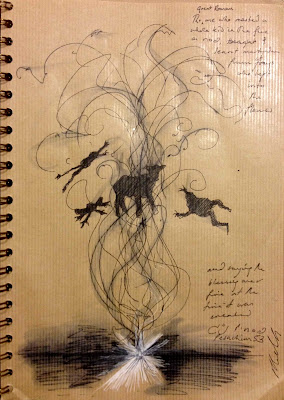 the great jewish leader in Rome who roasted a whole goat in the fire on eruv Pesach, learnt martyrdom from the frogs who jumped into the fire.

and saying the blessing over fire at the time it was created. at the conclusion of shabbat.

(discussing the custom of eating/not eating roasted meat on Pesach depends on where you live. but shouldn't eat meat that looks like the sacrificial Pesach lamb outside of the temple, i.e. the whole animal. This introduces us to Theodsius, a jewish leader in Rome, who would roast a whole goat, and the Sages said that if it wasn't him who did this then he would be excommunicated. to prove he was a special case due to his learning rather than being violent, the talmud quotes a fire based teaching of his about martyrdom. and the example of the frogs during the plagues who jumped into ovens to prove God. this page finishes with the next mishna that discusses saying the blessing over fire at havdalah at the end of shabbat)
Posted by Jacqueline Nicholls at 22:12