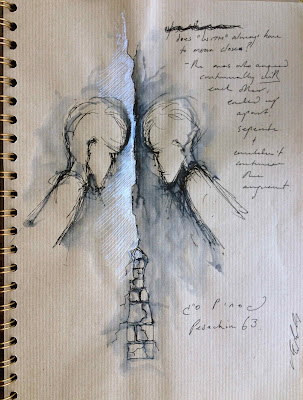 does "with" always have to mean "close"

eg to argue with someone. do they have to be near or can it still be done even though you are estranged?

the pair who argued constantly with each other ended up apart. a wall came up and they couldn't continue. their argument. their life. their sanity.

(R Yohanan and Resh Lakish are quoted as constantly argued if with = in physical proximity. the pesach sacrifice cannot be brought with leven, does that apply to people in the group still owning chametz, even if they are not physically there. or just the priest and those there? if a sacrifice needs to be brought with 40 loaves of bread, which side of which wall do the bread need to be... R Yohanan argues that they don't need to be physically present to be with. R. Yohanan and Resh Lakish ended up estranged after an argument, no longer speaking. Resh Lakish died. R. Yohanan went mad. it seems "with" still needs a connection.)
Posted by Jacqueline Nicholls at 10:44