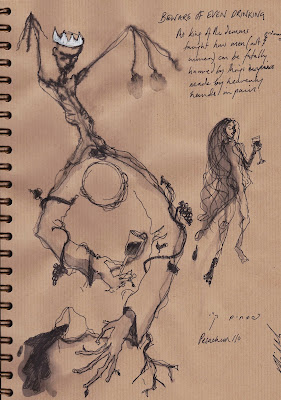 BEWARE OF EVEN DRINKING

is the king of the demons dangerous?
Yosef the Demon taught how men (not ordinary women) should be careful about drinking in pairs. even numbers can be fatal.
but not things that are man-made, just things from heaven. like wine, and beer, and women....

(more demons! strange tales from Yosef the Demon who says that Ashmedai, king of the demons, is only a king not harmful... but others disagree. kings are a capricious moody bunch. Other stories on this page about witches, and ex-wives who use the dangerous double drinking to cause harm.
some interesting 'facts' about the dangerous pairs - only pairs of heavenly made things are fatal, not man-made items. And women aren't affected. Apparently demons aren't interested in how much women drink. and demons only bother you if you are bothered about them.... so be like a woman and turn your back to the demons and drink as evenly as you like)
Posted by Jacqueline Nicholls at 23:34