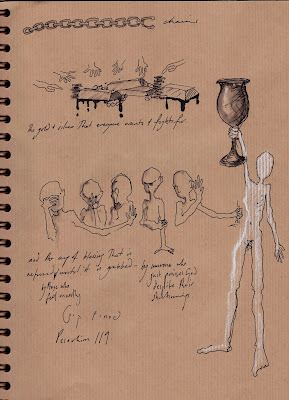 two chains - one of wealth, the gold & silver that the nations grab and go to war over.
the other, the cup of blessing that is passed along the line of those who feel unworthy to praise God. Until it comes to David who just praises God anyway.

(2 different chain stories on this page. the first describes how Joseph collected all the world's gold and silver in Egypt, that the children of Israel took with them when they left, that when back to Egypt when the Pharaoh attacked the tribe of Judah under Rehoboam, the wealth then went to Cush, to Aram, back to Israel, to Assyria, back to Judah with King Hezekiyah, then to Babylon, to Persia, to Greece, and eventually ending up in Rome.
contrast with the chain at the end of the page. A cup of wine is passed around, Abraham feels unworthy to bless because his son was Yismael. Isaac won't bless as he fathered Esau, Jacob refuses to bless as he married two sisters, Moses won't bless as he wasn't worthy to enter Israel, Joshua doesn't feel up to it as he didn't have sons. So David takes the cup and praises God... except David wasn't exactly perfect either...)
Posted by Jacqueline Nicholls at 21:26