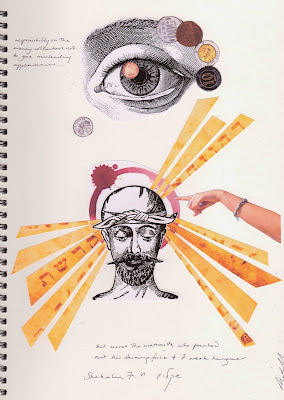 the responsibility is on the money collectors to appear to be trustworthy, so no pockets or places to hide coins.

but curses on the Matronita who pointed out R. Yona's shinning face, and his seven week hangover.

(bit of a double standard on this page. begins by discussing that the people who collect the communal money cannot wear anything within which coins could be hidden, so they cannot be accused of stealing. the responsibility is with them not on the viewer. Later in the page a Matronita remarks on R. Yona's shinning face and speculates that he is drunk. This is R. Yona who has a hangover til Shavuot after drinking 4 cups of wine on Pesach. R. Yona does not take responsibility for his misleading appearance, says his face shines dues to his wisdom, and curses her.)
Posted by Jacqueline Nicholls at 15:37