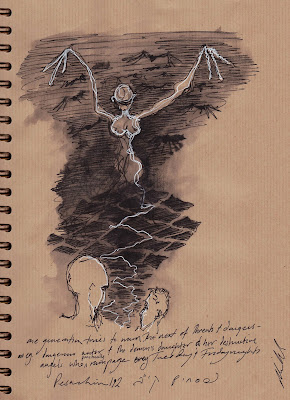 one generation tries to protect the next and warn of threats and dangers.
like the demon daughter and her destructive angels who punctually rampage every Tuesday and Friday night.

(various Rabbis instruct their sons & students, of many things that could be harmful. a lot of them could be basic health & safety eg don't drink water from a river at night. yup, might slip and fall in. but it is explained in terms of demons. apparently tues or fri night is dangerous to drink any water because that's when the demons are out. And why tues & fri? Agrat, the daughter of the demon Mahalat, leading 180,000 destructive angels, are out to destroy on those nights. story of an encounter with her and R. Hanina b. Dosa, where he could have eliminated her completely but instead limited her wanderings to two nights of the week. can't get rid of the demons completely, need to make some time for them)
Posted by Jacqueline Nicholls at 13:03