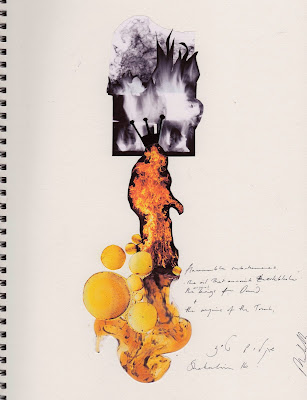 the king's reign and dynasty begins with oil, anointed next to water.
to lead a people whose defining book began with white and black fire amongst the waves of the great sea.

(discussed on this page is the ark and it's contents. a horn of anointing oil was kept in the ark. this oil was used to anoint kings at the beginning of their dynasty, establishing their monarchy, the ceremony to be done next to a river. Also in the ark are the tablets, both the broken first set and the whole second set. The tablets are described as being engraved with letters and details in-between like the small and large waves of the great sea. I am struck that the kings, and priests, were anointed with oil. making them highly flammable... to be leaders of a people whose Torah is described as white fire engraved on black fire.)
Posted by Jacqueline Nicholls at 03:23