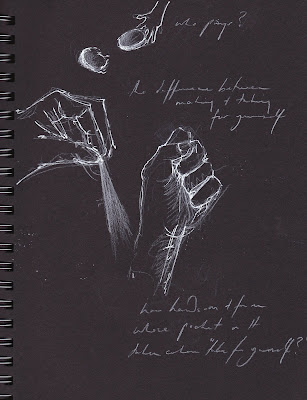 how hands-on is making as opposed to taking?

whose hand pays when something is taken?

(this page continues to debate the connection between Yom Kippur temple service and the inauguration service of the Temple, both having a 7 day sequestering of the High Priest. other festivals than Yom Kippur are suggested but Yom Kippur the High Priest has to "take for yourself" implying that some of the offerings are paid for by him, not from the communal funds. but this is compared to "make for yourself"with other obligations and cannot be concluded that taking is the same as making when it comes to payment. It stuck me that when something is taken it is held tightly. but when it is made, obviously depending on the technique but in general the hand needs to slightly looser, allowing for the object to become it's own thing.)

Posted by Jacqueline Nicholls at 11:41