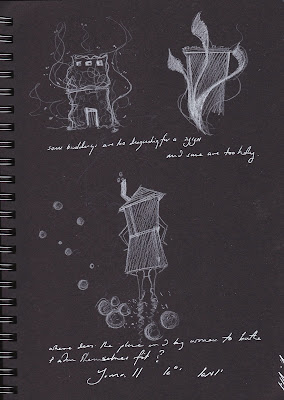 some buildings are too disgusting and disrespectful to have a mezuzah

and some are too holy.

so. the women's house, the place where women bathe and adorn themselves, where does that fit?

(trying to decide the principle behind the list of buildings which require a mezuzah and which don't. The out-house, the bath-house, tannery etc don't. Storehouses, storehouse used by women to adorn themselves also don't... the discussion revolves around ideas of residency and also dignity. The argument that some places are too disgusting to have mezuzah falls a bit flat when taking into consideration that the Temple did not have a mezuzah. The argument going that it was already a holy structure and the mezuzah is for mundane, but not too earthy, buildings. And it is interesting to note that it is specifically women's bathing and adorning venues that are discussed. From other parts of the Talmud it is clear that there were male bath-houses as well...)
Posted by Jacqueline Nicholls at 17:52