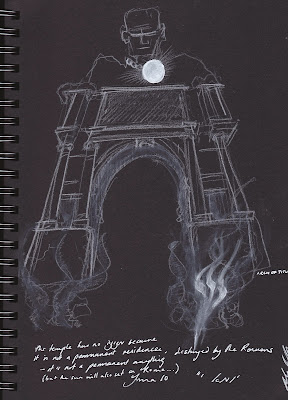 (but as for Rome, it's not permanent either, the sun will set on the destroyers...)

(this page identifies various nations from biblical characters. and the origin of Persia. who were involved in building the second temple, that was then destroyed by Rome. Also discussed is the Parhedrin Chamber, where the High Priest was sequestered for a week prior to Yom Kippur, whether or not it needed a mezuzah. One opinion is that it didn't, as it was not a permanent residency. This drawing shows the Arch of Titus, built in Rome after the destruction of the temple, looming over it is a giant, another character from this page who was so tall he wore the sun as a necklace. it is a little anachronistic as the giant mentioned in this page is a giant living in the land of Israel before it was conquered.... but every nation rises and falls. No one, even the giants, greatness lasts forever, the sun sets on all)
Posted by Jacqueline Nicholls at 02:00