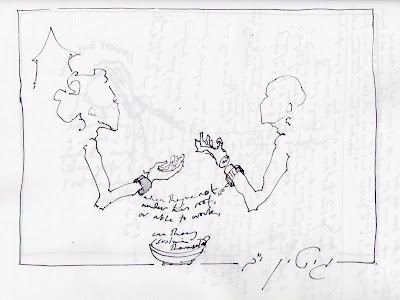 when they're not under his roof, or able to work, can they sustain themselves?

comparing a wife and a slave. does the master have any obligation to provide for the slave like his does for his wife. A test case is if they (wife and slave) are exiled to a city of refuge. The master has to continue to provide for his wife but not his slave. Another case is if the slave's hand was cut off by another. They have to compensate the master for loss of earnings and medical bills. The slave is sustained by charity. The case of the exiled wife is slightly more complicated as also discussed is when the husband says that she can keep her earnings, and he has no obligation to sustain her. This also applies when she is exiled and not living at home. The talmud argues that you cannot use the verse "the honour of the king's daughter is within" to justify her not going out to work when she is not living at home. In contemporary modesty literature, this verse is used as back-up for all sorts of ways to limit women's movement and agency.
Posted by Jacqueline Nicholls at 22:42