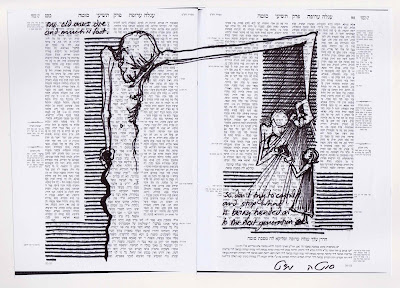 when the old ones die, much is lost.

but don't try to stop and control what is being handed on to the next generation.

Sotah ends with a mishna where the Sages decreed that various celebratory luxuries should end after various wars, and then listing all the the ways the honour of Torah and wisdom ceased when certain rabbis died. The previous talmudic discussion mentions that after the destruction of the temple fruit has lost it's flavour and smell. It mentions a story of R. Huna finding a fragrant date, wrapping it up, only for his son Rabba to detect it's scent. Thus proving to R. Huna that his son is pure, so he gives it to his son as a gift. Rabba then gives it to his son Abba. Which upsets R. Huna. Thus proving that fathers love their sons, more than their fathers. This theme of three generations gets repeated at the end of the page. After the war of Vespasin, drums were forbidden. There is a story where Rabba b. Rav Huna made his son a tambourine, but his father, R. Huna again, destroyed it. Amongst the list of things that were decreed forbidden post-war with Titus, was teaching your son Greek.  The grandfather blocking, controlling and resenting what their son is trying to give to the next generation. No wonder that the honour of Torah ceases....

and so ends mesechet Sotah. It has been a difficult 48 pages, I've hated it. and yet I finished it. And so tonight I am hosting a siyyum, to celebrate this learning and to say goodbye to sotah. and to all it contains.
Posted by Jacqueline Nicholls at 19:58