"We all came into this world naked. The rest is all drag."  RuPaul

this has been a tough mesechet to learn (they've all been tough. this has been particularly painful). the jealous husband accuses his wife of infidelity, and then 48 pages elaborating on the ritual of trial by humilation, guilty til miraculously proven innocent. With some twists and turns (including some fascinating stories gossiping about various characters' sex lives. Seems that once we are discussing sotah, everyone's intimate relationships are up for speculation. various characters in tanach, the people's relationship with the land, and Torah itself)  It begins with the number of witnesses needed to confirm the husband's suspicions. and a comment that bringing a husband and wife together is a miracle similiar to the splitting of the Red Sea. A key narrative in the formation of the nation, and redemption from slavery in Egypt. But comparing the phenomenon of a couple coming together with the miracle at the sea is acknowledging that at the essence of relationship is a division, a split. Causing distrust and suspicion. This divide and rupture in relationships between a couple is at the beginning of sotah. At the end of sotah we learn about a divide in the generational relationships. Sotah ends with describing the demise of various great things - Torah knowledge, scholar's death, glory, the taste of fruit. And a repeated story of a rabbi trying to stop and control what his son is teaching the next generation. Good things come to an end, yet the world and life continue. We are doomed to be isolated individuals. We are apart from our intimate loved ones, both in vertical and horizontal bonds.We come into this world naked and alone, and we remain so. Despite any attempt to build connections.

This mesechet goes into the sotah ritual in much detail, and running throughout I have had so many questions - what was it like for the wives? what did it feel like, to go through this ritual? to not be trusted? to have one's husband's jealousy be treated more seriously than one's own personal dignity? And if found innocent, then to be rewarded by becoming pregnant with the son of the man who put you into the humiliating situation in the first place? What was it like for her? - And to those who say that it never actually happened, that just makes it worse. Mesechet Sotah then becomes the talmudic rabbis expanding the humiliations of the torah text and fantasising what they wish they could do to women if only they had the chance. Sotah takes the talmudic misogyny and brings it up a notch. It grotesquely highlights the power relationship in marriage. The wife is the possession of the husband, under his control, and accountable to his irrational fears. He controls her friendships and relationships. She is his house, and should stay in the house. She must fear her husband, and the community acts on his behalf to check if she is keeping to the house rules. As I learnt Sotah, so many dvrei torah that I have heard at Jewish weddings kept popping up. At first their familiarity made me smile, but seeing them in context made me wonder why on earth are we still evoking Sotah when we discuss our intimate relationships. Why is this part of the Torah?

And sotah is the halachic hook for the practice where jewish married women cover their hair. It's an asmachta, a loose hook (and in a poetic resonance, the hat-rack came off the wall at tonight's siyyum), but this ritual where the wife is humiliated into pushing her to confess is the scriptural back-up for hair-covering. If it is humiliating to reveal and dishevel her hair, ergo, respectable married women must cover their hair.  There's a certain logic there.... And I brought into that way of thinking about halachic development, and 22 years ago, I was a young bride and decided to cover my hair.  I say "decided." I went along with social convention.

I have 22 years of hats, scarves and wigs. I've done them all (apart from snoods.... just odd). I have a fine collection of trilbies, pork-pies, fedoras, berets, and spent many winters gallavanting around in a bowler hat that made men of a certain age smile and ask me if they were now back in fashion. I learnt how to wrap my head in colour, tame swathes of fabric into folds. The turban is my current personal favourite, decorated with flowers, butterflies, sparkly jewellery. I say this because I want to make it clear that I am not rethinking hair covering because I dislike how it feels or looks. I am rethinking it because I do not want mesechet sotah to have any part of my appearance, my self-constructed identity. I want to distance myself from this text and say no. This ritual should have no part to play in how women are treated in this society today.

Tonight at the siyyum a friend pointed out that whilst in these drawings I have put a thick black line through the main talmud text, I have not censored the commentaries at the edges. There will always be side discussions and interpretations. I want not to care. And yet I live in a community who might just do that. My husband's rabbinic status will be judged because his wife doesn't cover her hair. Even though that way of thinking buys into a paradigm of control and power that has nothing to do with our relationship. The whispering at the margins might still happen. But that is not a good enough reason to continue covering my hair and identify with a practice that I find so deeply troubling.

But stopping covering my hair is also terrifying. I am very aware that when I dress it is a costume and armour. I speculate about how I will be seen, who am I in the judgmental gaze of another. An added bonus about dressing as I do is that it confuses the lazy categories of who is a religious jew (she covers her hair, but she wears trousers... she learns gemera, but she swears like a trooper when discussing her learning....) and I get a certain sense of mischief from being a walking contradiction and confounding expectations. But I don't dress the way I do just thinking about how I will be seen or not by others. This way of dressing has become a visual representation of my identity when I go out into the world. It's my 'look' and I do not know who I would be if I didn't do it. But I've also become stuck in it, in danger of becoming a caricature of myself. A visual representation of the mindless routine, no longer questioning, searching and discovering. 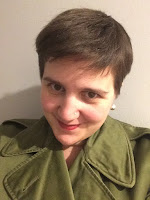 Tonight I hosted a siyyum where I discussed all this, and more, with some dear  friends whose opinions I respect and value. They said much that was more thoughtful than I can summarise. It was an open conversation, pouring sunlight and emotional and critical analysis on the dark parts of our heritage, a conversation that needs to happen more regularly. Although it would also be wonderful to close the book on sotah and be distant from it. As one friend said last night, there is so many other things to get angry about.  I don't know tonight if I will leave the house tomorrow with a bare head or not. It's winter at the moment and a terrible time to be exposed to the elements. But for now, goodbye mesechet sotah, and all that you contain. This is me. Time to find a new drag.
Posted by Jacqueline Nicholls at 03:26