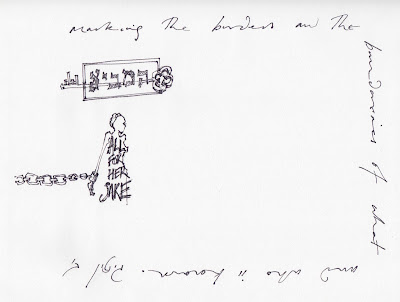 marking the borders and the boundaries of what and who is known.

I am struck by how this mesechet starts, but it is not unusual for the mishna to begin in mid-conversation. It assumes that you know that Jewish legal divorce needs a document, written by a scribe, with witnesses, given from the husband to the wife. And that if he can't give it to her directly, he can appoint an agent.

Gittin, the tractate that discusses the divorce process, begins with the law that if a get (bill of divorce) is being delivered from one place to another by an agent, they must declare that they witnessed the writing of the document and/or the witnesses signatures. The borders of what is inside and what is outside Israel is defined by various cities on the boundaries. The reason for the declaration is debated. Either it is because the process of divorce is not known outside of Israel, and that it is done for her sake. Or it is because the signatures to the get might not be known within Israel. The testimony of the agent, a single witness, is accepted in this case due to the concern of the rabbis that she might become an agunah - a trapped wife who is unable to marry as she has not been properly separated from her husband.... all this is for her sake. I am skeptical that it really is for her sake. Seder Nashim so far has not been kind to women, and so I am wary to go along with that claim. She is trapped only in as much as the constructed system locks her in.

Since the divorce process is centred around a written document, I thought I would use writing as drawing for this mesechet. In previous mesechets I have added a few lines of text more or less as an afterthought. a summary of the page and my interpretation to lead into the drawing. I have not been entirely satisfied with how these two elements, the drawing and writing, aren't integrated. I have approx 90 pages to work on this, and on the content of the written texts.)

Posted by Jacqueline Nicholls at 21:13