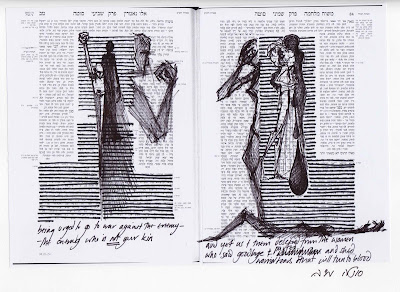 fight the enemy! they are not your kin!! says the warrior priest.

and yet us and the enemy descend from the women who said goodbye and parted. and shed warrior tears that will turn to blood.

one lay on the threshing floor and became the ancestor to kings. and the other cried tears, and was trampled and threshed by all. becoming mother to ruthless enemy warriors. poor Orpah. she didn't deserve this rabbinic rape.

The priest appointed to address the people at a time of war begins his speech (in hebrew) pointing out that this is not a civil war between tribes but a fight with The Enemy. The Other. Other parts of the speech compares it to the fight between Goliath and David. The text exaggerates Goliath's inhuman strength, and calls him the son of a hundred fathers and a dog. Everyone fucked his mother like a treading on the threshing floor. His mother is identified as Orpah.... and now the story is very different. This is not The Other. The giant warrior vs. the son of man David. It is the descendents of two women who were once sisters, bonded to Naomi. Both initially wanted to return with Naomi to Israel, and be part of the people. One eventually listened to Naomi, kissed her goodbye, cried and returned to her people. Both end up on the threshing floor. One gets up, having seduced Boaz and becomes the great-grandmother to David and kings. The other is gang-raped...... Orpah doesn't deserve this ending. she did what Naomi asked her to. So she wasn't as tenacious as Ruth, but why make her the mother of Goliath, and turn her into a whore? and it makes fighting The Enemy as not fighting the other, but fighting someone who there once was a bond. The warriors who fight Israel are a reward for Orpah's tears. Why is Orpah written like this? bad things happen when your character leaves the biblical narrative...
Posted by Jacqueline Nicholls at 00:47