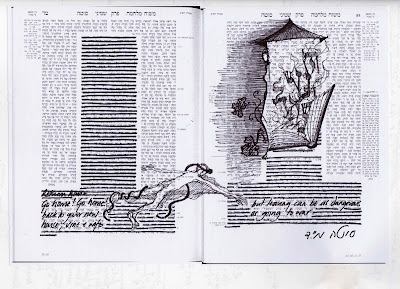 Go home! Go home!
back to your new house, vine, wife,
go and start your life.

but leaving can be as fatal as going to war.

this page finishes the discussion about the speech given to those going to war. Those who have a new house, vineyard or wife should not fight. (and house, vine, wife - very practical things to living. shelter, income, relationships is interpreted as different forms of learning) Also returning are those who are afraid. One opinion is that the fear is due to awareness of one's sins, such as the speaking in between putting on the tefillin on the head and then the arm. A mistake in tefillin causes stumbling. Also on this page is the beginning of the next chapter. Another speech and ritual that has to be conducted by the priests. This is the ritual of the egal erufah. When a body is found in between cities, the leaders have to publicly atone for the city not taking care of travellers, and allowing them to set off into dangerous territory. War is scary, but going home is not without risk.
Posted by Jacqueline Nicholls at 10:52