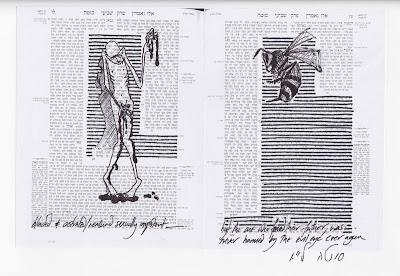 but the one who faced their father, was never harmed by the evil eye ever again.

(the talmud has taken a bit of detour. The mishna listed various texts that can be said in any language, and others that can only be said in hebrew. lashon hakodesh. sotah can be done in any language. The passage about the blessings and the curses was done in hebrew. part of the narrative of entering the land, was that the torah was written in 70 languages on stones by the Jordan. This page describes the stones worn by the High Priest, as part of his clothing. With half the tribes inscribed in one, half on the other. similar to blessings and curses with half the tribes on each mountain. Joseph's name is written with an extra heh, earned because did a kiddush hashem in private. when he didn't sleep with Potiphar's wife. Joseph was planning to, but the coitus was interupted by a vision of Jacob at the window, and a threat that his name would not appear on the high priest's stones. He regained control of his penis, but the sperm leaked out of his fingernails. R. Yohanan describes Joseph as being fruitful, because the evil eye has no power over him. He, and not the evil eye or his lust, is in control of his penis. Also on this page is a story about how the land was conquered. Moshe's hornet, that didn't cross the Jordan, was on the bank and flung it's venom at the inhabitants. Blinding and castrating them. Attacking the eye and the penis. mirroring Joseph seeing a vision and losing his erection. One in the eye. all 3 of them)
Posted by Jacqueline Nicholls at 00:19